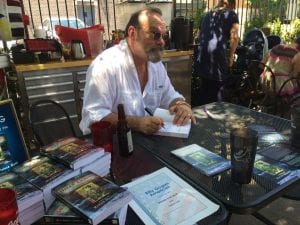 On Saturday June 11, 2016, a heat wave rolled over the city of Chicago. It was well into the 90’s and you could cut through the humidity with a knife. As most Chicagoans are concerned, it was just a sunny summer day in the city. The weather didn’t seem to bother anyone as people came in off the street to take a gander as a small crowd began to gather on the Palace Grill Patio. With the draw of the Palace’s historic loyalty to the Black Hawks, we gathered in the shade to discuss the release of Billy Gogan. This is was my first book signing and I was unsure what to expect. To my amazement there was a good amount of people who filtered through and two boxes were signed and sold! We stayed well into the afternoon, eating, drinking and chatting about all things Billy Gogan. It is fair to say it was a fantastic start to our signing tour! Thanks to the Palace’s owner George Lpmparis and his amazing staff. It was truly a humbling and notable moment being the first of many signings.